What Is Redlining and how did it start?

Redlining is the discriminatory pattern of obstructive practices that deter the home-ownership of African Americans and other people of color (Gaspaire). Shaun McGann explained that in the US this term is associated with the Great Depression that lasted from 1929-1939. President. Franklin D. Roosevelt created the New Deal in response to the Great Depression with the intention of lifting the country out of the rubble and into the prosperity that it longed for. In response to the failing and struggling economy, FDR spawned the creation of the Homeowners Loan Cooperation (HOLC) in 1933. The Roosevelt Institute explained that this “federal agency’s main task was to refinance home mortgages that were in default or at risk of foreclosure due to the 1929 crash and the collapse of the housing industry”. In theory, this was a great innovation to solve the problem that saw many people struggling to continue to own property or start to own property in such a depleted economy. However, its intentions to help all Americans had many shortcomings and long-lasting impacts in the entire US and specifically the minority communities throughout the city of Hartford. 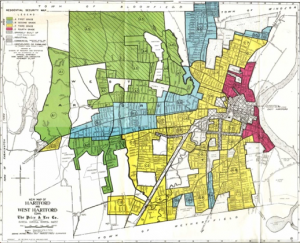 HOLC Residential Security Map of Hartford Area 1937 (Source: On the Line: How Schooling, Housing, and Civil Rights Shaped Hartford and its Suburbs)

Who is Frank Milliken and how did the HOLC change Hartford?

Frank Milliken was the HOLC field agent assigned to Hartford that would scout and talk to banks in the city so he could eventually send his report to the HOLC central office about the safest and riskiest investments. This shaped how investors would then invest in these areas and how much the down payment would be for the individuals in that specific area. One thing that is key to understand about the color-coded map created, based on Milliken input, is that it did not outright say that the more suburban places were the best investment; but it does show a clear splitting up of Hartford into sections of safe investment, which created the incentive for the upper-white class fleeing to the suburbia in Hartford. One of the factors that influenced the neighborhood ratings was the “social status” of the population heavily based on the dominant standards of privilege (Normen).

Milliken documented the percentage of foreign-born and people of color in a specific neighborhood as well. This leads me to believe that one of the goals was to map out what neighborhoods were predominantly populated by non-white and therefore less lucrative. Although it is unclear, yet, what exactly caused the segregation effects throughout the cities in America, research like Norman sees the necessity for studying these maps to understand this phenomenon. He explained: “[a]s scholars closely analyze these maps and related data; new questions emerge about HOLC’s intent versus observable effects”. What is clear is the role that race, and class had on investors’ choice to invest in particular neighborhoods. The decision and choice to create these maps using the information that Milliken collected led to an even larger generational gap between individuals of different backgrounds. I believe that this was a pushback against equal opportunity and a strategy for investors to reinvest in neighborhoods that reflected the demographics that they wanted to support.

Why does redlining still matter today if it happened so long ago?

The way in which neighborhoods were split up by desirable and less desirable shows us how the impact of the decision to implement this could set a precedent of inequality. For example, in 2000, West Hartford population was about 17 percent minorities, while Hartford’s was 81 percent (McGann). West Hartford, the more prominent of the two, shows a clear long-lasting segregated effect on where people live that was only polarized for the years following HOLC’s decision to separate Hartford into distinct neighborhoods. The property value in West Hartford has only continued to grow and the quality of everything connected to it, such as education, has continued to surpass Hartford as well. The neighborhoods in Hartford that were redlined have primarily poor-quality housing and are occupied by people of color and foreign-born immigrants. If we look back to the HOLC appraisal reports in 1937, the North End of Hartford received a higher rating and was a much more desirable than the South End of Hartford. The difference in the rating can be attributed to the racial composition of the neighborhoods as they had similar physical characteristics (predominantly two-family households) and had comparable price ranges (McGann).

All of this adds to the realization that the inequalities in opportunity and fairness had a great impact on the outcome of generations that followed. They used data in a way that benefited some groups and disservice others. Whether the results of the HOLC were intended to racial segregate these neighborhoods is something we cannot answer. However, I will argue that the act of redlining went hand in hand on with the act of segregating Hartford through racial lines. Racial segregation became racial tension, and racial tension became violence in the Hartford riots of July 1967. However, the result of actions like those that the HOLC made was what created and promoted pockets of inequality that grows through time and throughout America, like the case of Hartford, CT shows. What this history of redlining should teach us is that the HOLC did influence the decisions of prospective buyers and investors in Hartford affecting negatively African Americans. These actions perpetuated a system of oppression based on the color of the skins of the people that live in those neighborhoods.

Dougherty, Jack, and contributors. On the Line: How Schooling, Housing, and Civil Rights Shaped Hartford and Its Suburbs. Trinity College, book-in-progress, 2020. http://ontheline.trincoll.edu/